It’s the best place for it, in my experience. ‘Outdoors’, that is. The clue’s in the name: Messy Play. It’s messy!

It all started with an old tin of Smash* I found in the kitchen cupboard.

Such innocent little faces. Such a loaded question.

“Um, you add water to it & it makes mashed potato. It’s too old though, so you can’t eat it.”, I hesitantly replied.

To be fair, I did have the Smash* in mind for messy play when I saw it. Just not then. It was already late: after dinner on a school day.

I tried to put them off.

You can probably guess how that turned out: 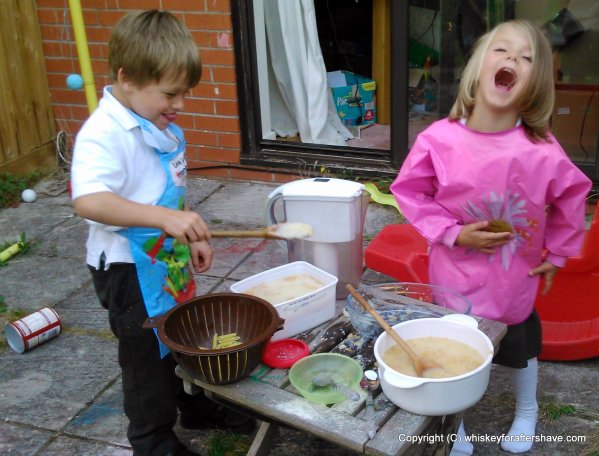 I poured the Smash* into a bigger container, then went back into the kitchen to find other stuff to meet the inevitable & imminent demand. By the time I returned Jake had found some water & had added it to the Smash*:  they were both terribly excited to find that it had indeed become mashed potato!

Actually that’s pretty much how our messy play works. They put the stuff I provide into their bowls & stir it. They add water. I say “Not too much water; the bowl is nearly full”. They ignore me. They say: “What else have you got?”. I rush back into the kitchen to find something else old / unwanted / cheap that they can they muck about with. I find a little container to put it into & a little spoon to go with it. I bring it out.

Tesco had very kindly delivered a very large pack of their laundry powder that I didn’t order. I had plenty of it, & it was free. In it went! With strict instructions that it was to go nowhere near any little mouths!

I added a little laundry liquid too. It was very blue: they loved that!

And all you budding chefs out there will no doubt be pleased to know that play sand also works very well in this particular type of inventive cuisine. Although I suspect good old Mr Blumenthal probably got there first!

Jake made a cake, Ellie made soup, & they were both very happy with their creations. 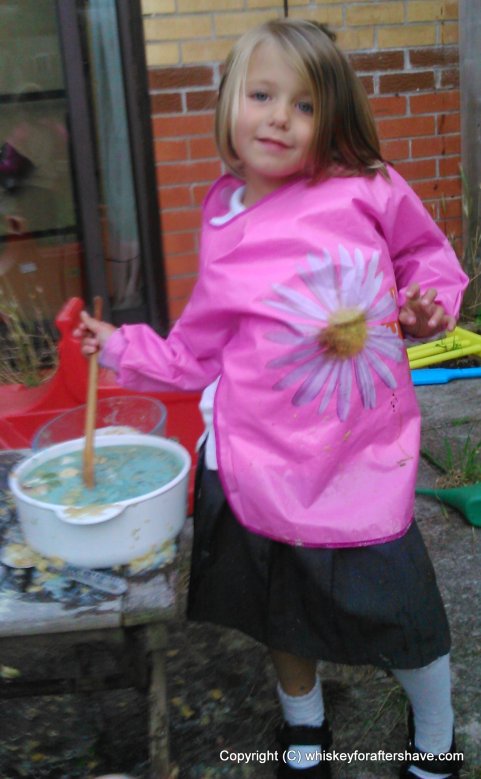 I was tempted to cook their creations, but thought better of it. I’m not joking: I actually did that once. Bad idea.

While Ellie was posing Jake I think was still busy adding the finishing touches: a lovely ring of green dye around the edge of his cake. I was impressed: it looked great! Then he stirred it all in together with everything else.

It was about then that I noticed it was getting dark, & started saying things like: “It’s late, you need to go to bed soon, look: it’s getting dark!, come on it’s time to go inside, stop now please”. And they actually listened!

They ignored me of course, but at least they listened.

After a fair bit of nagging, bribery & corruption I did manage to get them to stop & head bedwards.

It just goes to show how much they love their messy play!

*other brands of instant mashed potato are available. Probably. Although, to be honest, I don’t know of any.

Here are some nice buttons for sharing:

Hi, I’m ‘JallieDaddy’ (a.k.a. 'J.D.'). Later in life than most I became a Dad, of the stay-at-home variety, to twins Jake & Ellie ('Jallie'). After some early difficulties they are now 8 and doing well. Sadly though my wife and I are now separated, they live with their mother & I only see them for parts of 2 days a week It's been, and is, tough! On all of us. For more please see my 'About Us' page.

Alive & Kicking Being Silly Captions Drama Family Funnies Growing up - fast Happy children In the Garden It's a Twin Thing Let's Play! Memes Music We Like My Sunday Photo Outdoor Play Parenthood is a Form of Insanity Personality Silent Sunday Things that can go right & have gone right Wales

All original material copyright (C) to the author. Please only use images with author's permission; if quoting text please reference back to the original post with a link. Thank you
%d bloggers like this: